Players combine Hero Arts with cards to form strategies and decks, and the goal of establishing balancing is to give them more options. Even if there is an outstanding deck, we'd like there to be several counter decks, which will contribute towards a fresh meta.

However, after analyzing the game data since release and looking at the usage rates of Hero Arts and win rate of decks, we've discovered that decks revolving around Nergigante and the Hero Art "Spike Launch" has made the meta stale.

Some changes will be made in the upcoming August update to rebalance strategies , and a Hero Art will also be tweaked. The details for changing the Hero Art "Spike Launch" is as follows. 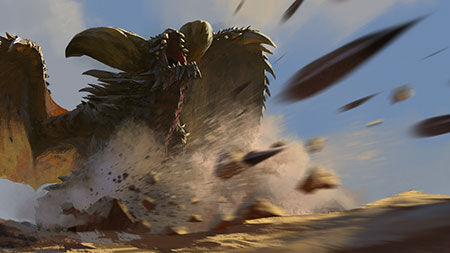 [AP:20] Split damage equal to sacrificed life points to all enemy units up to 12 points of damage.

Nergigante's Spike Launch decks were meant to be played by constructing decks to help cover the disadvantage of sacrificing your hero's life, and going from a low life point situation to defeating units in order to steal the advantage.

However, as it stands, players sacrifice life in the early game, steal the advantage in the midgame, and can easily maintain the advantage throughout the game with a high damage dealing Hero Art that doesn't even allow the opponent a chance to take back the advantage. In other words, you can sacrifice life and make sure the opponent will never be able to touch you, essentially ending matches much earlier than intended.

With this, victories are not won based on deck construction or skill, but rather relies solely on the ability of the Hero Art "Spike Launch." That explains why any deck that uses "Spike Launch" has a high win rate.

An unbalanced Hero Art that is relied on heavily will push players towards certain heroes and decks in the meta including future updates. We've decided to change Nergigante's Hero Art "Spike Launch" in order to make the game more fun and exciting.

We hope TEPPEN battles will become more enjoyable with this balance change.

We look forward to seeing you in the battlefield!

Retrieved from "https://teppen.fandom.com/wiki/Version_1.1_Update?oldid=3380"
Community content is available under CC-BY-SA unless otherwise noted.