The TEPPEN HEADLINE is the name of the official live broadcasts hosted by the Japanese TEPPEN team. It was first announced on February 12, 2020[1] and have since happened periodically to announce a new expansion.

The broadcasts are always hosted by members of the development team alongside select few guests. Since the third broadcast, the staff has had to comply to social distancing rules due to the COVID-19 pandemic.

The early broadcasts had live translations to English, however more recently the English version is instead hosted live at the PlayTEPPEN Twitch channel hours after the Japanese version ends. 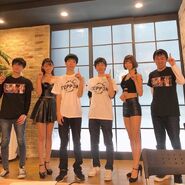 Satoshi Ogihara and Yuki Okano at the room the sixth broadcast took place and kuran on webcam before it started.[4]